A wedding gift from Joseph and Larry in Sonoma.The thangka is from one of the six largest of the monasteries of the Gelukpa sect – the sect of the Dalai Lama. Manjushri:Manjushri (Tibetan: jam pal yang. English: The Glorious One with a Melodious Voice).The bodhisattva that represents the wisdom of all the buddhas of the ten directions and three times. Manjushri has one face and two hands held to the heart in the Dharma Teaching gesture (mudra) delicately holding the stems of two lotus flowers blossoming at each ear. The blossom on his right supports the flaming sword of wisdom and the left supports the Prajnaparamita Sutra. Very peaceful and smiling, he is adorned with a crown, jewel and gold ornaments and variously coloured silk garments, seated in vajra posture above a moon disc, multi-coloured lotus.
ORIGIN: Chamdo,Tibet
PERIOD: 1800s
SPECIFICATION: this excellent Thangka is gathered from a Lama in Tar Monastery, Tibet.
The Tar Monastery, which means “Holy Place for the 100,000-Body Maitreya buddha,” is located in the Lotus Flower Mountain south of Lusha’er town. Huangzhong County, Qinghai Province. The monastery, 26 km away from Xining, the provincial capital.
Zongkapa, founder of the Gelug (Yellow) Sect of Tibetan Buddhism, was born in the place where the Tar Monastery is located. The 3rd Dalai Lama Soinam Gyamco initiated construction of the monastery in Zongkapa’s honor. Gradually, it became the mecca for Buddhists of Tibetan, Mongolian and Tu ethnic groups. And the 4th, 5th, 7th, 13th and 14th Dalai Lamas as well as the 6th, 9th and 10th Panchen Erdenis once lived there. During its heyday, the Tar Monastery had as many as 70 Living Buddhas and 3,600 monks. Many of them were appointed Hutugto Living buddhas by the Qing (1644-1911) imperial court. Due to its size and influence, the Tar Monastery emerged as one of the six major monasteries of the Gelug Sect. Thangka and Frescoes in the Tar Monastery are rich in content and elegant in style. Debating Buddhist Scriptures, Portrait of Six-Way Samsara and Fresco of Kalachakra ,Shkyamuni,Taras reconsidered the most representative. The frescoes are all painted with yellow, red and blue colors to highlight the themes.
Now this is in our home. It feels odd somehow to be like stewards now, to protect this piece of art. Not to mention realizing any of it’s symbolism in this lifetime… if only… CLICK images to enlarge. 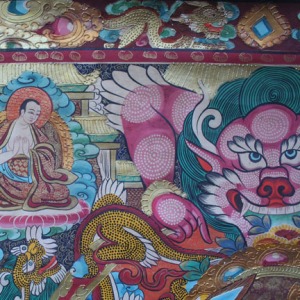 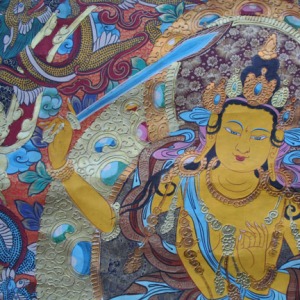 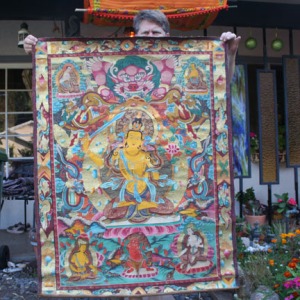 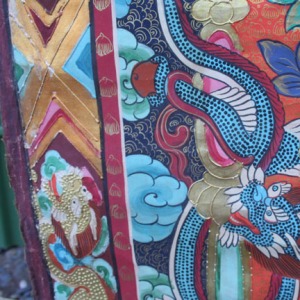 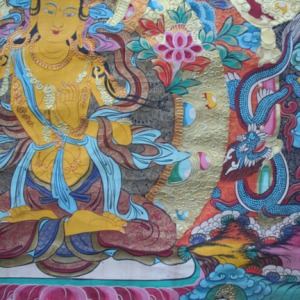